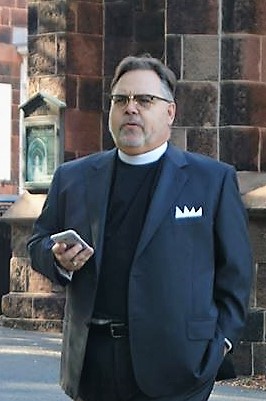 Alan grew up in Iowa and Arizona, with most of his formative years spent in a small farming community in the northwest corner of Iowa. His parents were the owner/operators of Hesse Chevrolet, and he and his younger sister attended high school there.

Alan graduated from Morningside College, a Methodist liberal-arts College, in Sioux City, Iowa (B.A. in Mass Communications and Business). From there he went on to graduate work in Communications at Pepperdine University, in Malibu California.

For over twenty years he worked in the communication field, at AM/FM radio and at television affiliates of NBC and ABC. In 2001 and was ordained to the priesthood the following year. In 2001 Alan was hired by the Right Reverend Mark Beckwith (now the retired Bishop of Newark) as Assistant Rector of All Saints Church, Worcester, MA. He was made Associate Rector there and also served as Priest in Charge. All Saints Church is a large urban parish that ministers to the needs of the most at-risk in the population, as well as meeting the spiritual concerns of a large parish steeped in a long tradition of music and the arts.

In 2005 he was hired as Rector of Epiphany Parish of Walpole. For ten years under his care, the parish grew strong in reaching families with children, children with special needs and also an aging population.

Father Al, began serving as Rector at Christ Church in September 2015. He believes the future of the church is one able to connect the amazing love of Christ Jesus to needs of the community both locally and within the wider context of ministry.

He served for 10 years as a member of the Barbara C. Harris Camp and Conference Center, having served most recently as the Chair of the Board. He has also served the Diocese of Massachusetts on the Diocesan Council, Executive Council, and Bishop’s Search and Consecration Committee.

Fr. Alan is passionate about justice and young people. He is a trained anti-racism facilitator and is has currently working on the Diocesan Social Justice/Antiracism Committee.

In the fall of 2017, he was elected as Trustee to the Church Home Society. The Church Home Society is an independent non-profit corporation related to the Episcopal Church. Its objective is to provide support to young persons (ages 9-25) by making financial grants to both religious and secular organizations which work with and/or for young persons, and further to provide support in other ways as the Society may determine to be useful. Fr. Alan is grateful for this opportunity to better the lives of the underserved youth of Massachusetts.

In 2019, Father Alan was elected as member of the Board of Trustees for the Stevens Treatment Programs. It is a private, non-profit corporation, operating a continuum of therapeutic residential programs as well as community and home-based transitional services in Swansea, MA. Stevens serves youth (age 11-22) with behavioral and emotional problems that present serious treatment concerns. Stevens’ youth-guided and family-driven programs are committed to positive outcomes. Steven’s believes in offering a pathway to a new beginning provides a chance for an improved future.

Alan is married to Dr. Tim Orwig, who is a lecturer at Boston College and Leslie University, and author of many articles and publications. His most recent book is Cape Cod Canal, a history of the Canal on its hundredth anniversary. They have one son, William, an athletic 8th grader introducing his family to all sorts of new athletic adventures.

In his “off” time Alan enjoys time away reading science fiction novels, saltwater fishing with his son, as well as kayaking and playing the saxophone.

Fr. Al, or Alan, brings a sense of inclusion for all people. He is blessed to meet the people of Christ Church “where they are,” in pain, in joy, and in laughter.